The Campaign to Get People Vaccinated: Manipulation vs. Reasoned Persuasion

I've seen the following meme recently on social media, and given the timing of its spread it presumably relates to current efforts to convince Americans to become fully vaccinated against COVID. Here's the meme: 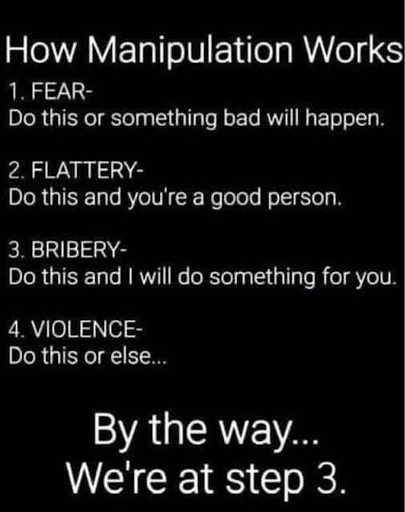 (In the event of any difficulty reading the image, it says the following:

1. FEAR--Do this or something bad will happen.

2. FLATTERY--Do this and you're a good person.

3. BRIBERY--Do this and I will do something for you.

Looking at the meme as a philosopher, there are numerous problems with it. One problem relates to "steps" 1 & 2, and involves the failure to distinguish between what Plato called "mere persuasion" and persuasion that proceeds via "instruction"--or what I'm inclined to call the distinction between manipulative persuasion and reasoned persuasion.

The point is that we can persuade people through a kind of trickery in which we bypass people's rationality and responsiveness to evidence and arguments, instead appealing directly to irrelevant feelings and emotions to shift a person's view in the desired direction.

Or we can persuade people by give reasons and evidence that support the truth of the view we are asking them to accept.

The former is a kind of manipulation. The latter is not.

So, consider the so-called "step 1" of manipulation in the meme above, labeled "Fear":

Do this or something bad will happen.

Consider this step in relation to what the meme was surely intended to be a commentary about: the ongoing COVID vaccination campaign. Suppose that I point out that while COVID infection often has only mild health repercussions, in a significant number of people (much higher than for viruses like, say, the flu), it can lead to serious long-term health problems and even death. We've been able to isolate some of the risk factors for serious illness, but not all--and many apparently healthy people have died from the disease.

Suppose, furthermore, that I point out that the vaccines for COVID have been shown to be very safe and effective--and especially effective at prevent serious illness.

And suppose, furthermore, that I note that with widespread vaccination, we will be able to return to our normal lives without either seeing a surge of COVID-related deaths or whole classes of vulnerable people being forced to isolate themselves to avoid infection. But without widespread vaccination, we'll continue to face the tough choices we faced before vaccines were available: either we radically altar our collective way of life to protect the vulnerable (with the economic, social, and personal costs that this brings), or we don't, in which case vulnerable people will either be dying in frightening numbers or forced into seclusion.

And suppose I conclude on the basis of all of this that if we don't collectively make a commitment to vaccinate as widely as we can--which at a minimum means vaccinating ourselves and may also mean urging friends and family to do likewise--then the circumstances in our country will be far worse for many people than would be the case were we to make that collective commitment to vaccinate.

An argument like that is not manipulation. If you are about to drive without a seatbelt and I point out the differential accident survival rates of those who do and don't wear seatbelts, I'm engaged in reasoned persuasion, not the manipulative kind. Likewise with the vaccine argument above.

Of course, reasoned persuasion is open to criticism and response. It evolves through dialogue, through considering objections  and responding. Reasoned persuasion, because it is oriented towards uncovering the truth, is open to being tested in the light of critical questions and the like. The point here, however, is that reasoned persuasion, which is not manipulative, can have the form of saying "Do this or something bad will happen." What distinguishes it from manipulation is that it is backed up by reasons and has an orientation towards speaking the truth.

The same can be said about "step 2." What are the characteristics of a good person? There is no universal consensus, of course, but there are still things we can and do agree about: virtues, or good character traits, that are typical of the people we call "good."

Given all the facts laid out in my argument above, you can see that it is easy to construct an argument for the conclusion that, on this broad portrait of a good person, someone who gets vaccinated against COVID is acting as a good person would. (Of course, there are cases of individuals who face a greater-than-typical risk from vaccination, and so might be very good people but choose nevertheless not to vaccinate; but generally, for the vast majority of us, the risk of vaccination is very low.)

In short, everything I said about step 1 applies to step 2: there are non-manipulative arguments for the conclusion that getting a vaccine is the sort of thing a good person as described above would do. Or, put another way, there are moral arguments for getting vaccinated that are good arguments for most ordinary, healthy people. Of course, these arguments are again open to critical examination, questions and objections. People with good motives may be misinformed about salient facts, and so they are unconvinced that they should get vaccinated absent a deeper investigation of those facts. But it is also the case that good people are open to being persuaded by an honest investigation of the evidence.

The point is that there can be good reasons to think that getting vaccinated is the sort of thing a good person, fully and properly informed, would do.

Of course there is manipulative persuasion that appeals to fear, and manipulative persuasion that appeals to flattery. What distinguishes these manipulative forms of persuasion is that they do not invoke evidence and reasons to support their conclusion. Instead, they paint a scary picture without offering clear, sound evidence for the view that the desired behavior contributes to preventing the scary picture from becoming reality. Or they pander to the egos of their audience, making the audience feel good about themselves, and then just trust that those good feelings will spill over onto the desired behavior without offering any solid moral arguments in support of the behavior.

Manipulation is about creating associations between feelings and views through building subconscious connections. You hold up an idea you want someone to believe, and you stoke certain emotions (fear or pride, etc.)--and you hope that those emotions will latch onto the idea in the right way. Fear will be associated with not doing X because of the vivid association created, even though you have done nothing to support the conclusion that failure to do X will have the fearful results. Or that gushy feeling of being a great person is associated with doing X, even though no reasoned moral argument is offered in support of the view that doing X is the kind of thing someone motivated by virtuous character traits would do.

When it comes to steps 3 & 4 in the meme, things are a bit different. 3 & 4 are not forms of persuasion in the sense of convincing you that something is true--either manipulatively or instructively. 3 & 4 are about behavior modification through rewards and penalties. But in labeling 4 "VIOLENCE," the meme ignores the fact that there are a wide array of penalties that are imposed to modify behavior that don't typically fall under the heading of violence--at least not violence in the typical overt form that we usually have in mind when we use the term (there are some less conventional understandings of violence that see all coercive pressures as violent, but I'm not going to dig into those understandings here).

Behavior modification through rewards and penalties is a widespread human practice. Parents do it when they reward and punish their kids. Teachers do it with gold stars and time in the thinking spot, or with A's and F's. Governments do it when they offer tax breaks and tax penalties. Laws are built on negative consequences for disobedience.

It is hard to imagine a functioning society that does not use rewards and penalties when the behavior at issue is important for the sake of social health and success. Of course, there are always pressing questions that we need to wrestle with when we are considering the imposition of rewards and penalties: is the matter important enough to try to shift people's default behavior by adding incentives and disincentives? And if so, what is the best approach: incentive-based, or penalty-based?

3 is often employed when reasoned persuasion of types 1 & 2 are insufficient. Milder (not-overtly-violent) forms of 4 are sometimes employed when 3 fails, without an overtly violent form of 4 ever being deployed. Many times we stop at 3 because we conclude that the most effective way to proceed is to push on with a combination 1-3. Sometimes the matter is so serious (murder), that we implement a violent (forcible arrest and incarceration) form of 4 immediately without waiting to see whether 1-3 alone, or a milder form of 4, will work. In terms of social tools for getting people to behave civilly and beneficially with one another, we use a mix of 1-4 in ways that don't follow some clear, inevitable pattern.

What is troubling about this meme is that it does not present 3 & (milder forms of) 4 as inevitable features of civil society, where 3 & 4 are employed variously in various situations, in various combinations with 1 & 2, based on assessments of social needs, individual rights, and pragmatic questions about what works. And it does not recognize that the "penalty" side of behavior modification comes in a range of forms, most of it not overtly violent. Instead, the meme represents 4 as violence, and 1-4 as this inevitable progression of increasing severity, with violence the final frightening stage in government population control. And then it ends with saying that we are just about to enter that final stage.

The meme offers no evidence, no reasoned argument, for the view that this is how our nation's campaign to get people vaccinated is evolving. It simply lays out this ominous set of stages, with VIOLENCE (in all caps) about to come hammering down.